Ahrens looms use both ratchet brakes and an Automatic Tensioning System. 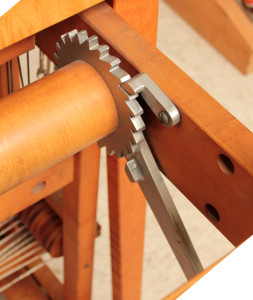 The brake on the cloth beam is a ratchet. 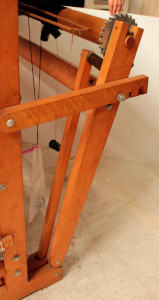 The warp beams on Ahrens looms have two brake systems. One is a ratchet and the other is a drum or round wooden disk on which a rope is wound. This isn’t actually a brake but an Automatic Tensioning System, and is only used when weaving. The ratchet is used while beaming and can also be used for weaving instead of the automatic system. You never use both at the same time. 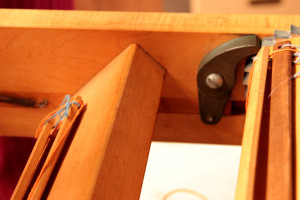 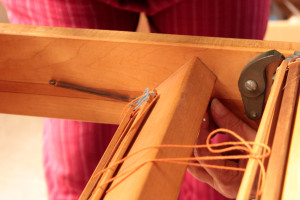 The ratchet brake is engaged when the dog or pawl is in touch with the teeth. Flip the pawl to disengage it. There are ingenious ways to keep the ratchet disengaged when you are using the Automatic Tensioning System. 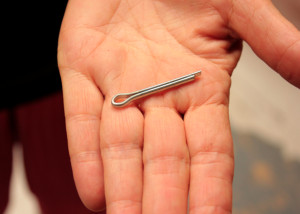 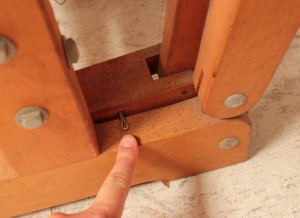 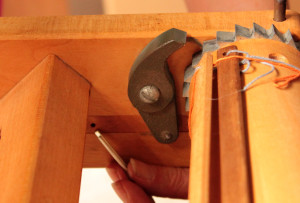 On the two-beam looms, there is a wooden bar or “arm,” a piece of wood sunk into the side frame that slides back and forth. It moves the pawl toward and away from the warp beam ratchet so it can be controlled while sitting at the loom. Notice about midway along the length of the bar there is a hole and there is another hole on the frame itself. When the bar is pushed in, the two holes can line up and a cotter pin or nail can fit into the holes, which keeps the pawl from engaging the ratchet.

The system is for all kinds of weaving, except when the weft needs to be beaten in hard, like in tapestry and rug weaving, because the force of hard beating allows the rope to slip and the warp to come forward with each blow.

If the warp doesn’t stay on tension when weaving and keeps coming forward, you are beating too hard. If you must beat hard, used the ratchet brake and not this system. 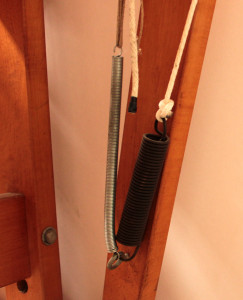 The tightness of the small spring is what determines the amount of tension on the warp. The  string that connects the rope to the small spring is used to adjust the tightness of the spring and therefore the warp tension. The shorter the string, the tighter the rope on the drum and the more tension on the warp. The end of the string loops into the end of the spring and is knotted onto itself with a slip knot  or a toggle used on backpacks to allow for adjusting the length (tension).

During weaving when the shed opens, the warp beam rolls forward a bit loosening the tension on the other end of the rope at the small spring. The rope slips a little. The heavy spring takes over again, putting the rope back under tension. When the shed closes, the warp beam rolls back to its starting point. The slippage is a few thousandths of an inch, and the warp stays under the same tension we set at the start. 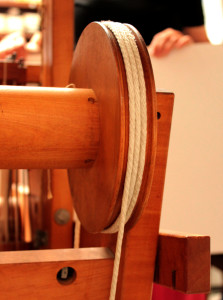 If the rope doesn’t slip easily on the drum, the problem could be the that the surface of the drum is sticky and preventing it from slipping. Jim Ahrens recommended no finish on the drum, but over the lifetime of these old looms sometimes they may have gotten a coat of varnish. If your loom’s drum is sticking to the rope, gently sand off the surface of the drum with fine sandpaper. 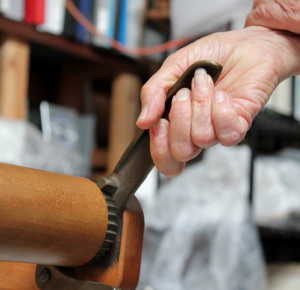 To bring the warp forward, you just crank the handle at the cloth beam’s ratchet without having to release the warp beam. As you crank the warp forward  you exert more force on the warp than the force of the heavy spring, causing the rope to slip. When the warp is advanced just the amount you want, stop cranking. The ratchet holds the cloth beam in place, and the heavy spring prevents the warp beam from rotating, keeping the warp under a consistent tension. To understand how the system works, read this fairy tale.