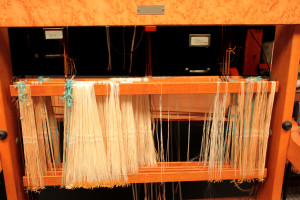 The shafts are made of two wooden bars and heddles: string or Texsolv. (Not metal, because there are no metal bars to slide them on.) The length of the heddles determine the distance between the two bars. Jim Ahrens wanted them to be as light as possible, so he used ash wood.

As you can see on this photo, most of the heddles are concentrated in the middle of the shaft, but we left a few empty heddles on each end to keep the shafts from tipping while weaving.

The two bars are kept parallel by two long metal pins on each end. The end pins need to slide freely in holes that are big enough to allow them to move easily. There is nothing on the bottom of the pins such as stoppers or rivets; it is the heddles that keep the bottom bar from falling down. 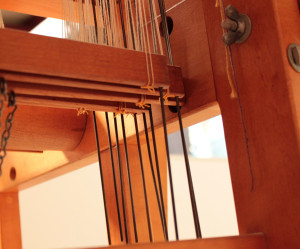 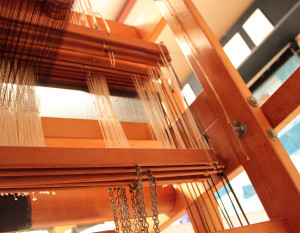 Note the empty heddles right next to the endpins. They stabilize the shafts when weaving a narrow warp. 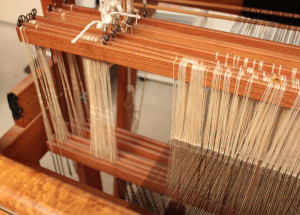 On the top of the upper bar there are two screw eyes for hanging the shafts from the shaft cords on the loom. For more on the correct cord path for looms with a side tie-up, see the page on Treadles and Tie-ups. This is also where the height of the shafts will be adjusted. 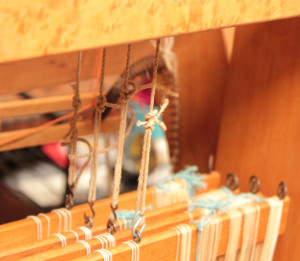 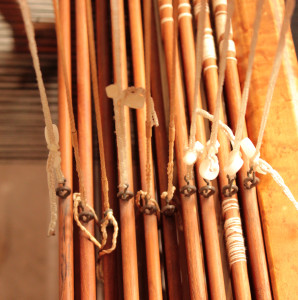 We will adjust the height of the shaft with knots on the shaft cords near the screw eyes, or using arrow pins if we have Texsolv cords.  We will come back to this at the end of this page. A discussion of the cords path on two-beam looms is coming soon.

It’s a good idea to always keep several empty heddles at the ends of the shafts next to the shaft pins. This will keep the shaft from tipping when weaving narrow warps. 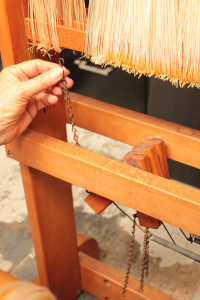 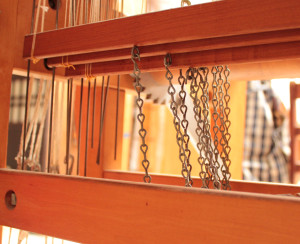 Ahrens looms have very lightweight shafts which makes them easy to lift while weaving. On the other hand, they need to be held down to prevent them floating up into the sheds when not lifted. This is done by a system of chains and springs. Each shaft has its own spring attached to two wooden levers, which stretch the spring horizontally above the treadles and below the shafts. The levers are attached by a pair of chains to the bottom of their shafts.  The first photo shows a chain underneath a shaft getting attached to the bottom bar of the shaft. Look closely to see one chain going from its lever to the bottom of the shaft. The other end of the lever is attached to its spring. The second photo shows all of the chains on one side attached to their shafts. 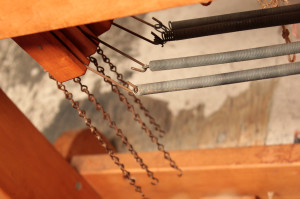 If the shafts are too hard to lift, your springs are too tight. All new springs need to be stretched. Hook one end onto a strong cord, and tie it to the leg of a sturdy table or the side of your loom. You can put a pencil or a dowel into the other end to protect your fingers, and pull on the spring repeatedly. At first, the very beginning of each pull requires a lot of force. Once it becomes easier to start the stretch, your spring is ready to use. 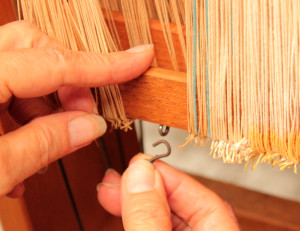 When should chains be attached or unattached?

There are screw eyes on the bottom bar for attaching the chains that link to the springs. This picture shows hooking or unhooking a chain to a shaft. For threading the loom you want them unhooked so the shafts can be easily raised so you can see the heddle eyes more clearly. 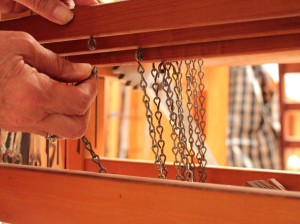 When weaving, of course you want the chains hooked to the shafts. Do this after sleying the reed but before tying the warp to the front apron bar. If you do it after you’ve tied on the warp the heddles will move greatly out of place and you’ll have to straighten them out. This is doable but it will be easier and you’ll save time if you do it before tying on the warp.

Ahrens looms have shafts of lightweight construction and can’t support heavy metal heddles and there are no bars to hold them. String or Texsolv heddles are essential.

Braided polyester string heddles, made by Texsolv, come joined in a continuous bundle of 100 heddles and in a range of sizes to fit different looms. The eyes remain open so they are easier to thread than homemade string heddles. Be sure to cut them apart after they are on the shafts. String heddles however, are easy to make at home. 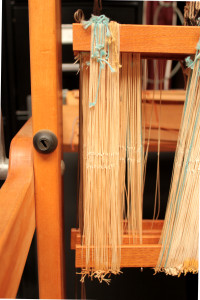 String heddles are light, cheap, and you almost always have materials on hand to make them. Jim Ahrens called this “a boring job, but necessary. My father and I raced each other to beat our record of 100 an hour.” This is how he taught us to tie heddles for the new looms in the studio. Three of us sat around a table and tied heddles for 5 days—we enjoyed working with our hands and liked the investment we were making in the looms; we chatted a lot, but didn’t race.

Two templates, or jigs, insure that this becomes a satisfying, accurate task. With one template all the strings are measured to the right length, cut and counted. The other template makes tying the heddles relaxing and accurate. The template for the heddles’ length can be as simple as a smooth piece of plywood with one dimension that gives you the length you need when you wrap the string around it. I’ve also used a book as this jig.

Don’t skimp on the length of the string; tying knots with a short tail is frustrating and slow work. To be sure the length for the string is long enough, make it longer than you figure it should be. If one is available, use a heddle from the rear
shaft as a pattern. That’s because on many looms it is the shaft that opens farthest; therefore, its heddles would be stretched the most. However, you make all the heddles the same size (unless they are for a draw loom).

If you don’t have an old heddle to use as a pattern, measure the shed size at the back shaft. The heddle string should be two times the depth of the shed, plus two times the distance around the shaft bars or heddle bars, plus the length of the eye. Again,  this is the minimum, so add more string for making the three knots and tying ease. Try tying a few knots with the length you’ve chosen before making your length template. Remember, tying with short tails slows you down so don’t scrimp on the length. Choose a template that gives the length string you need and cut many strings at once, going around and around the template in groups that you count, say, 25 at a time. If you count carefully now and tie them a group at a time, you shouldn’t have to count again. Poly-cotton sewing thread is a good, strong choice for material. Crochet cotton size 20 or 30 is not so fine but works. If sewing thread seems too fine for you, just don’t use cord or string heavier than you need—bulky knots can get in the way and prevent a shed from opening for a very dense, warp-faced fabric. Sewing thread heddles aren’t any harder to make than string heddles, and the eyes are just as big as if you used string. Use what seems reasonable for your eyes and your weaving. 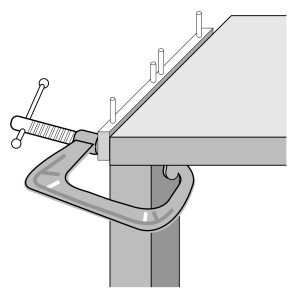 The tying template can be very simple, with four headless nails or smooth pegs driven in a board. The two center nails are where you tie the heddle eye so, for convenience, it’s helpful to have the nearer nail, or post, be pounded in lower than the further one to give you more tying room. The picture shows the kind I use. The posts are 1/4″ diameter dowels that are 1 1/4″ high with the short one 1″ high. Clamp the template to a table at a good height to make working easy. At the corner of a table, C-clamp the tying template on the edge of the table and at right angles to you, not on the side of the table parallel to you. The posts should be perpendicular to the table’s surface. It might take two clamps to get it in the correct position.

Tying the knots. Fold your measured and cut string in half and hook the mid point around the top peg. Bring the two equal tails toward the two pegs in the center. Begin a square knot and cinch it up to the first peg. Then tie another square knot around the lower peg. The bring it down to the end fo the jig and tie a third square knot at the bottom. You should have tails about 4-5 inches long at the bottom. You can use a granny or square knot, just be consistent. After tying the heddles, cut the tails of the knots short, to 1/8” long. Hang the groups of heddles on two rods that hold them taut and dab spar varnish on the knots and let them dry. Spar varnish dries smooth and tough but not glass-hard, which could be rough on the heddles.

Raise the Shafts for Threading 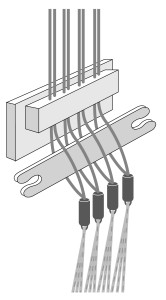 If your loom ties up at the side, it’s easy to raise the shafts by inserting a shuttle to prop them up at the side of the loom. To do this, pull down on the cords that  raise the shafts—all of them at once if you can or a few at a time—there are two cords attached to each hook. Be careful to grasp the cords near the hooks, not the hooks themselves. Work a shuttle in between the two cords by wedging it between the hook and the wooden bar of the loom above the hook. Work the shuttle through the cords for all the shafts and they will stay up just fine. You won’t be using the regular tie-up cords here; you’re just holding the shafts up with the shuttle in between the loom’s own cords. This is a lot easier than it sounds.

On two beam looms raise the shafts by propping two shuttles under the cords on top of the loom to hold the shafts up, like this: 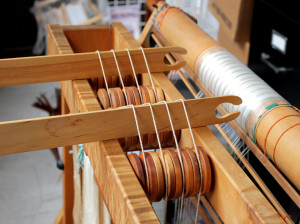 Why call them “shafts”?

In some weaving books, you see that the frames that hold the heddles are called “harnesses,” such as a four-harness or eight harness loom, for example. Although this is very common, it is an error. The frames that hold the heddles are
“shafts.” Complex looms, such as drawlooms, have two or more sets of shafts. Each set is called a harness and has its own function such as controlling the foundation weave or the patterning. The common hand looms we use are really one-harness looms (because they have only one set of shafts), with two, four, eight, or more shafts to the harness.