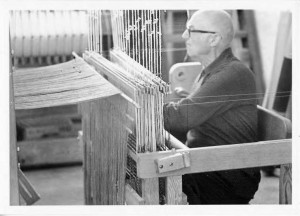 “I built my looms with sticks and string, just as they have been made for centuries.”—Jim Ahrens

I (Peggy) first met Jim Ahrens when I was a student at Pacific Basin School of Textile Arts in Berkeley, California, around 1975. He would hang around the weaving classroom and say, “You’re doing that the hard way.” We were doing exactly what our teachers taught us to do.

One day the owners, Pat McGaw and Inger Jensen, became interested in something he was telling them but they couldn’t understand what he was describing. So he said he’d build them a loom and bring it in. That really caught their attention.

The school then offered a class in Production Weaving where Jim taught us about efficient weaving techniques and equipment that handweavers in Europe use.

Pat’s brother, Jon Violette, decided he wanted to start a loom building business using Jim’s techniques and plans. The school got a grant and built a studio for the prototype looms that were built under Jim’s tutelage and to do production weaving with 3 apprentices. I was one of them along with Hilary Bendich and Annell Slack. It was like having a fairy godfather. Whenever we had a question, we just called up Jim and he come over and told us what to do. This is how AVL Looms came into being. The “A” is for Ahrens and the “V” is for Violette.

I felt what he was telling us was special and suggested we keep a folder with the notes of the things he taught us. We named it the “Chairman Jim file”. (Chairman Mao was operating at that time.) This file and his teaching in the production class became the basis for my many years of teaching and the books in the series, “Peggy Osterkamp’s New Guide to Weaving”. In those three books I thought I put in all I knew. Now that I am looking back at my notes and Jim’s answers to my copious questions, I realize that there is a lot more to write about.

Jim was the first in today’s American hand weaving world to use fine threads (@60-70 epi) and end-delivery shuttles–both are common place in our weaving world today. He brought “new” techniques (used in Europe for centuries) such as ways to calculate sett, weave good selvedges, the automatic warp tension system and may other techniques. What he taught and built into his looms were the most efficient hand weaving methods used just before the start of power looms. Once he said, “The weaving had to be efficient–if the mill pond went dry, there would be no power to run the looms.” 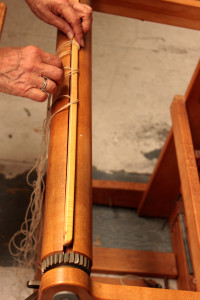 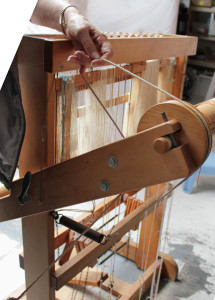 With this website, we hope to explain how the special features in the pre-AVL Ahrens looms work and to honor Jim himself. Most of the weavers he taught are long gone and their looms have been passed on to people who never had Jim to show them how to use them. We want to pass on this information to the generations that will continue to use his unique looms. We are always fascinated to see “his” features used on looms all over the world which always reminds me that these are real techniques, whether in cottage industries or in huge mills.